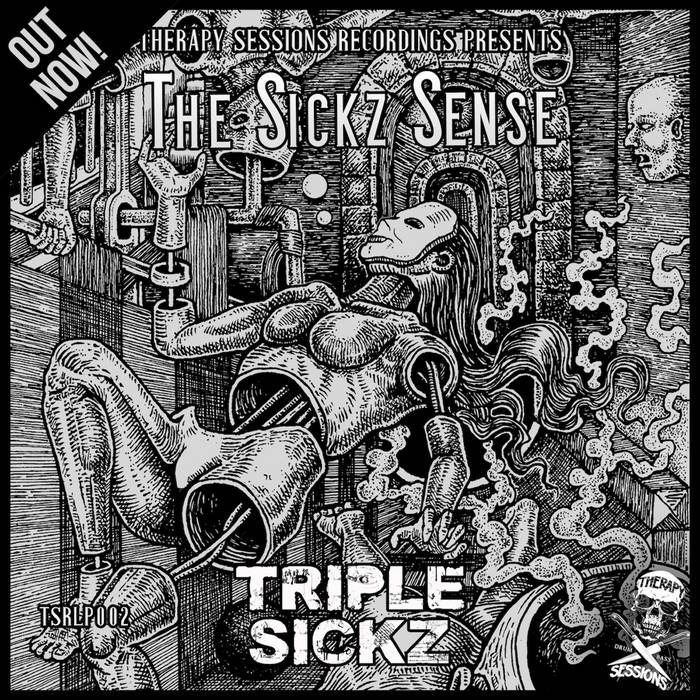 Triple Sickz is the brainstew of two dark twisted bass scientists - Marc 'Onyx' Naish and Matt 'Teksteppa' Wilkins, both based in the UK and long time residents for the legendary Therapy Sessions. With releases on Harder & Louder, Sustained, Mindocracy, Abducted,
and Mindsaw Recordings, these guys run the gauntlet style wise from tearing amen, militant drumstep, techno inspired futurism, crossbreed and neuro - all infused with their signature demented style. 10 absolutely banging tracks + with some cheeky remixes and collab made this album a perfect fit for their debut on Therapy Sessions Recordings.

The album starts out with a statement of intent in the form of DEVIL'S BITCH – a hard, proper stompy track reminiscent of vintage Renegade Hardware nights teaming with late 90s classic rave synth stabs and a growling, rumbling bassline. MICRODOSE is sublime tech dnb in its most perfect form.. tight percussion, futuristic samples sounding like the crazy inner mechanics of a slightly battered space vessel... A nod to the Offkey era that gets you right in the gut. BURN ALL VERMIN is the sound of fear and retribution in the alleyways and putrid darkness of the big city…scratchy beats so deep and disturbed, the bass twisting like a knife, like your irreparable soul. The city should be afraid of you.
BREEDCROSSER proves there’s no school like the old school, starting with a ripple of sound like a sonar echoing from across the void as we drop into distorted bass and a flurry of abrasive drumwork. Breaking down with classic rave stabs only to swoop back in with a wall of sound…

BITCRUSHER is a dark drumfunk lovechild heavy with amazingly intricate drum patterns while fragments of industrial / sci fi sounds call and response throughout.. this track has a bit of everything and is completely in a world of its own. LAB WASTE Rolls in with floaty pads over scratchy stabs and beats.. the sound of an escape, wild eyed and frantic through the corridors of a secret facility. KING OF HELL teams up with TSR veteran FORTITUDE, and begins with an angelic yet unholy orchestral choir build up worthy of the King of Hell himself, a crescendo rising with barrelling bass drums knocking insistently on the door to the temple, as you open the large, ornate doors and are lead, grudgingly into a portrayal of evil you never expected. A parade of persecution..
MEGALOMANIA featuring QST is another Tech Stomper marching towards an unknown future…a journey down the rabbit hole, an aural expression of our collective social megalomania..CHAINSAW (Massacre Mix)..A paranoia inducing riff bleeps away like a demented sos call over unsettling atmos whilst an aggressive, whirring buzz builds up as the kick drums pound. It's all guns blazing from the off as the huge distorted bass drives along in tandem with relentless drum stompery.

FORTITUDE finishes us off with a remix of MICRODOSE, turning the techstep workout further on its head into a snarling behemoth of a roller. Hypnotic and psychotic with a chameleonic shift to a breakbeat driven second drop.